The chair is composed of three curved plywood shells. In modern production the shells are made up of seven thin layers of wood veneer glued together and shaped under heat and pressure. This differentiates the newer chairs from the “original” (vintage) chairs which used Brazilian rosewood veneers and were constructed of five layers of plywood. Also differentiating the very earliest sets from newer sets were rubber spacers between the aluminum spines and the wood panels first used in the earliest production models and then hard plastic washers used in later versions. In the earlier sets, the zipper around the cushions may have been brown or black as well, and in newer sets the zippers are black. The shells and the seat cushions are essentially the same shape: composed of two curved forms interlocking to form a solid mass. The chair back and headrest are identical in proportion, as are the seat and the Ottoman. 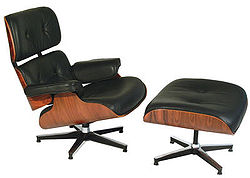 The Eameses constantly made use of new materials. The couple’s first plywood chair—the Eames Lounge Chair Wood (LCW)—made use of a heavy rubber washer glued to the backrest of the chair and screwed to the lumbar support. These washers, which have come to be called ‘shock mounts’, allow the backrest to flex slightly. This technology was brought back in the 670 Lounge chair. The backrest and headrest are screwed together by a pair of aluminum supports. This unit is suspended on the seat via two connection points in the armrests. The armrests are screwed to shock mounts on the interior of the backrest shell, allowing the backrest and headrest to flex when the chair is in use. This is part of the chair’s unusual design, as well as one of its biggest flaws. The rubber washers are solidly glued to the plywood shells, but have been known to tear free when excessive weight is applied, or when the rubber becomes old and brittle.

The chair was designed using technology for molding plywood that the Eames developed before and during The Second World War. Before American involvement in the war, Charles and his friend, architect Eero Saarinen, entered a line of furniture into the Museum of Modern Art’s “Organic Furniture Competition” in 1940, exploring the natural evolution of furniture in response to the rapidly changing world. Charles and Eero won the competition. However, production of the initially designed chairs was postponed due to production difficulties, and then by the United States entry into WWII. 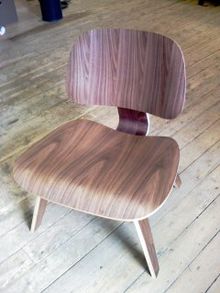 This interruption proved fortuitous to Charles. He began making molded plywood splints for the U.S. Air Force. The splints were modelled after his own leg and allowed him to hone the technique of molding the plywood into complex curves. The LCW was a result of this experience. Parallel manufacturing techniques, also during World War II, were used by Isidor Zuckermann’s firm in the United Kingdom to manufacture types of aeroplane wings and submarine parts. 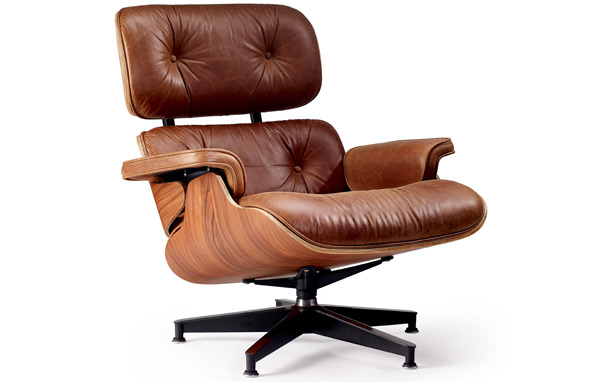